Last night’s Federal Budget contained a number of proposals that will impact both small businesses and your tax and financial planning.

The commentary in this document is based on initial observations and interpretation of the proposals based on the limited details provided in the Budget papers.

Note that these proposals require passage of legislation before they are implemented. We will continue to monitor these proposals and provide you with further communications as more details emerge.

The current after tax contributions limits is $180,000 per person, per financial year. If you are aged under 65 at any time in the financial year, you are able to make a $540,000 contribution under the 3 year bring forward provisions. This can be repeated every 3 years.

The Government proposes to replace the current limit to a lifetime limit of $500,000. This limit will take into account all the after tax contributions that have been made since the 1st July 2007.

If you have gone over the $540,000 limit, your $500,000 limit would be exhausted and no after tax contributions will be allowed to be made to your individual super account.

This will restrict the amount of money you can put into super. It will also impact a number of re-contribution strategies that can result in adult beneficiaries receiving tax free super benefits. This can cost your beneficiaries tens of thousands in taxes.

2. Reduction in the concessional contributions limit

The Government is proposing to reduce the annual limit on concessional superannuation contributions to $25,000 for everyone, irrespective of their age.

The reduction of the concessional contribution limits will limit additional savings that can be achieved through salary sacrifice. For example, in the 2017-18 financial year, if you earned $200,000 and were 49 years of age your employer should contribute $19,000 to your super, leaving you with only $6,000 that can be salary sacrificed into super, as opposed to $16,000 with the current limits.

This option will only be available to those individuals with a superannuation balance less than $500,000. It is proposed that the unused amounts will be carried forward on a rolling basis for a period of five consecutive years with only unused amounts that accrue after 1 July 2017 being eligible.

This could assist people with interrupted work patterns (e.g. parents or carers) or those on lower incomes that have not been maximising their concessional contributions cap for other reasons.

4. Reduction to the Division 293 tax threshold

5. Removal of the work test to contribute to super

Currently, individuals aged 65 to 75 who want to make voluntary contributions to their need to meet the work test. People aged 70 or over are also currently unable to receive contributions from their spouses.

The Government will remove these restrictions for all individuals aged less than 75, from 1 July 2017.

This will assist older people to contribute to superannuation. For example, this could involve contributing the proceeds from downsizing a family home or an inheritance.

6. Removal of the maximum earnings test to qualify for a tax deduction on personal super contributions

Currently, where a person is engaged in employment activities during a financial year, a tax deduction for personal superannuation contributions can only be claimed where the less than 10% rule is satisfied. This means that if your employment income is more than 10% of your income from all sources, including investment income, you will not be entitled to claim a tax deduction on your super contributions.

The Government is proposing to abolish this test, allowing all individuals up to age 75 to claim an income tax deduction for personal superannuation contributions. If legislated, this will effectively allow all individuals, regardless of their employment circumstances, to make concessional superannuation contributions up to the concessional limits.

This measure assists you if your employer doesn’t provide the ability for you to make salary sacrifice contributions to super. It will also help those who are partially self-employed and partially wage and salary earners.

From 1 July 2012, individuals with an income of up to $37,000 automatically received a Government contribution of up to $500 paid directly into their super. However, this Low Income Superannuation Contribution (LISC) will not be available in respect of concessional contributions made after 1 July 2017.

From 1 July 2017, the Government is proposing to introduce a replacement - Low Income Superannuation Tax Offset (LISTO). The LISTO will provide a non-refundable tax offset to superannuation funds, based on the tax paid on concessional contributions made on behalf of low income earners, up to a cap of $500.

The LISTO will apply to members with adjusted taxable income up to $37,000 who have had a concessional contribution made on their behalf.

Currently, an individual making a contribution into their spouse’s account is entitled to a tax offset of up to $540 if certain requirements are met. One of the requirements to qualify for the maximum offset is that the receiving spouse’s assessable income, reportable employer superannuation contributions and reportable fringe benefits in the financial year must be less than $10,800.

To be eligible to receive the contribution, the receiving spouse must currently be:

The Government proposes to:

9. Change to the taxation of the Transition to Retirement (TTR) Income Streams

Currently the earnings on superannuation fund assets/investments that support a pension are exempt from tax at fund level regardless of the age of the client or the condition of release used to start the pension.

This tax exemption, will no longer be available from 1 July 2017. This means that earnings on fund assets supporting a TTR after this date will be subject to the same maximum 15% tax rate applicable to an accumulation fund.

In addition, an election can currently be made for tax purposes to allow certain superannuation income stream payments to be taxed as lump sums. This can result in tax advantages for certain people under age 60 who make this election. The Government is proposing to remove this opportunity.

From 1 July 2017, the Government is proposing to introduce a $1.6 million transfer balance limit. This will limit the total amount of accumulated superannuation benefits that an individual will be able to transfer into the retirement income phase. Subsequent earnings on pension balances will not form part of this limit.

Where an individual accumulates superannuation amounts over and above $1.6 million, they will be able to maintain this excess amount in a superannuation accumulation account (where earnings will be taxed at the concessional rate of 15 per cent).

A tax on amounts that are transferred in excess of the $1.6 million limit (including earnings on these excess transferred amounts) will be applied, similar to the tax treatment that currently applies to excess non-concessional contributions.

Fund members who are already in the retirement income phase with balances above $1.6 million will be required to reduce their retirement balance to $1.6 million by 1 July 2017. These excess balance amounts may be converted to a superannuation accumulation account.

To broadly replicate the effect of the proposed $1.6 million transfer balance limit, pension payments over $100,000 per annum paid to members of unfunded defined benefit schemes and constitutionally protected funds providing defined pensions, will continue to be taxed at marginal rates, however the 10 per cent tax offset will be capped at $10,000 from 1 July 2017. For members of funded defined benefit schemes, 50 per cent of pension amounts over $100,000 per annum will now be taxed at the individual’s marginal tax rate.

From 1 July 2017, the Government has proposed to remove the anti-detriment deduction.

The so called anti-detriment payment (ADP) is a legacy of reforms to superannuation that started on 1 July 1988.

Basically, the purpose of the payment is to compensate eligible beneficiaries of a fund member for the reduction in lump sum death benefits that occurs because of the 15 per cent tax on earnings and concessional (pre-tax) contributions from 1 July 1988.

The ADP effectively increases the superannuation lump sum death benefit available to beneficiaries (spouse and children) so as to negate the effect of the 15 per cent tax that has been paid while the deceased member’s benefit was accumulating in the fund.

As speculated, a tax cut has been proposed at the current $80,000 taxable income threshold. As a result, marginal tax rates for resident taxpayers are proposed to change as follows:

Taxpayers with a low level of taxable income are not liable for the Medicare levy or pay a reduced rate as per the following table for the 2015-16 year: 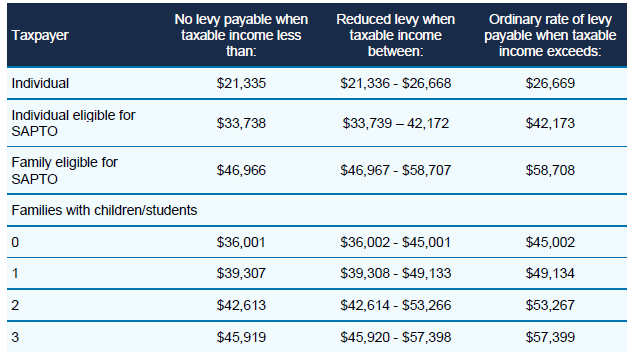 SAPTO is the Senior Australians and Pensioners Tax Offset which is available to those who are age pension age as at 30 June of the relevant year.

The Government proposes to extend the current pause on income threshold indexation for the Medicare levy surcharge and private health insurance rebate for a further three years from 1 July 2018.

The Medicare levy surcharge applies to taxpayers with income above certain levels who do not have a minimum level of private hospital cover.

Rebate percentages are automatically adjusted by the Department of Health on 1 April each year. The rebate adjustment factor is a percentage of the increase of the consumer price index and the average annual premium increase.

As part of the May 2015 Federal Budget it was proposed that a new single Child Care Subsidy (CCS) would replace the Child Care Benefit, the Child Care Rebate and the Jobs, Education and Training Child Care Fee Assistance from 1 July 2017.

This measure has not yet been legislated and it was announced that the proposed start date is now to be deferred until 1 July 2018.

If you have any questions about the JobKeeper or JobSeeker changes, feel free contact our office on 02 9223 4378.